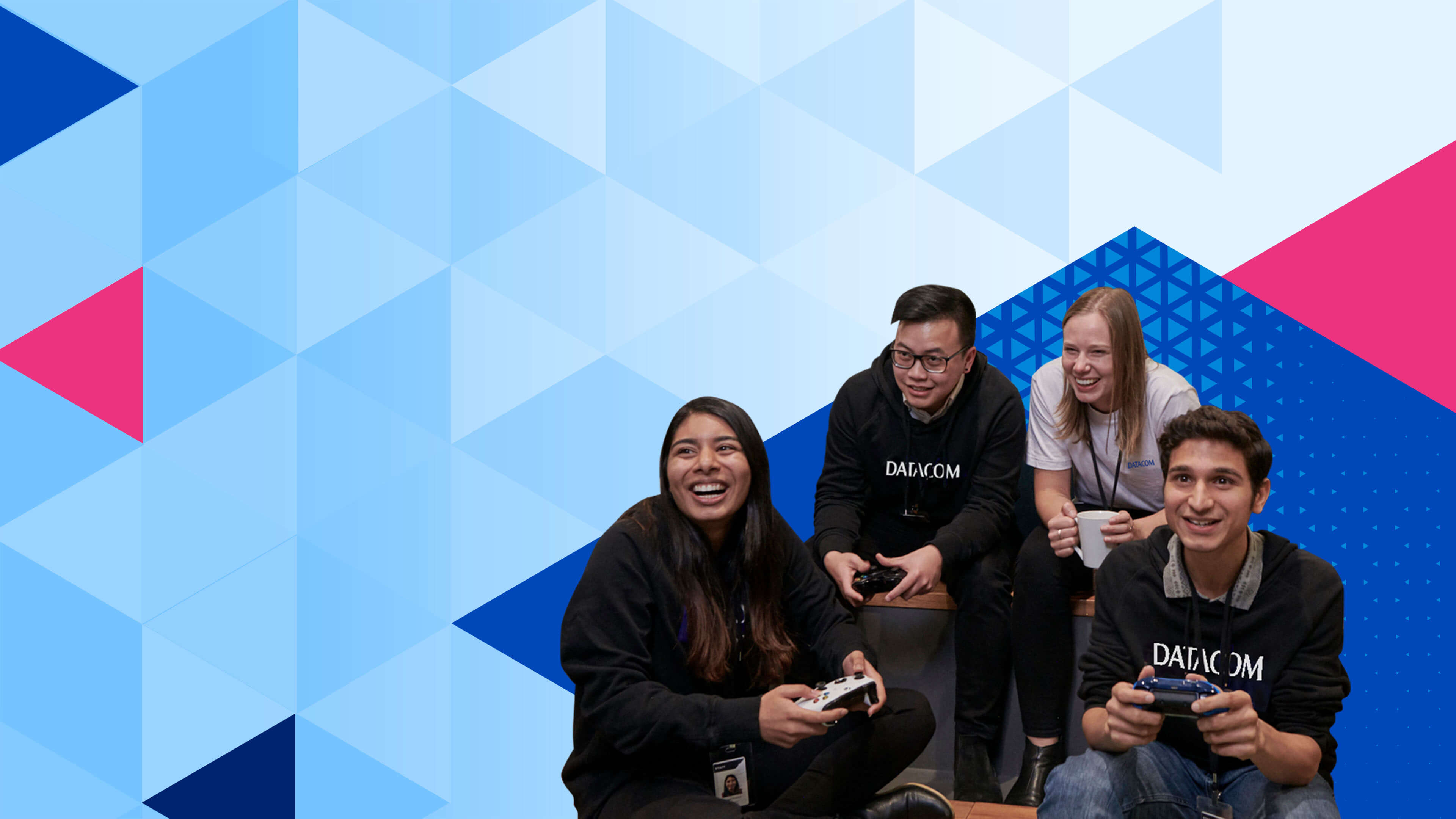 Our people are the reason our customers choose to work with us.

Technology is just a tool, but the right people can use it to change things for the better.

We have nearly 7000 people working across Datacom and their cumulative experience and skill is what enables us to work with businesses in every industry and to act as trusted partner to government organisations at a local and national level.

The diversity of thought that comes with working with a company of our size is highly valued by our customers, and as Datacom grows we’re focused on building teams that are reflective of the communities around us.

Investing in our people and giving them the opportunity to upskill is a priority for us, but we also believe we have a responsibility to grow tech skills beyond our own business. We’ve committed to being a net creator of talent, which means creating new pathways into tech careers, supporting training initiatives, providing internships and finding ways to grow the talent pool to support future demand. Developing the tech talent we need now and for the future

We currently have over 500 positions open across New Zealand and Australia, ranging from cloud engineers and service desk agents to cybersecurity advisors and app developers. We employ nearly 7,000 people and the continuing wave of digital transformation accelerated by the pandemic means our headcount is only likely to grow in 2023.

That poses a challenge for us given the tech talent crunch the entire industry is facing. We felt this acutely well before the pandemic closed our borders for two years, cutting off access to highly skilled migrants, traditionally a key source of new hires.

While we are once again welcoming new talent from afar into the Datacom family, we are also conscious we want to continue the progress and the investment we have made over the last few years in growing local talent. We have become a net creator of talent, working with organisations all over the country to welcome people into tech-related roles and reimagining how we support our existing staff to achieve their own career goals.

As the biggest employer in the sector, we feel we have a responsibility to do this. But it also represents one of the biggest opportunities currently before the country. According to the latest TIN200 report from the Technology Investment Network, NZ's top 200 tech companies generated $15.2 billion in revenue this year, up 9% from 2021. The tech sector now constitutes 14% of our exports, according to TIN, second only to the dairy industry.

Looking out to the end of the decade, there’s a strong likelihood that tech will be our biggest export earner. That’s an exciting prospect because the knowledge economy that tech powers, has the potential to lift the country’s standard of living and enable a low-carbon economy.

Among the TIN200, of which Datacom is the third largest by revenue, the average employee earns $89,711, nearly $28,000 more than the national median of $61,828. At this year’s Hi-Tech awards, Prime Minister Jacinda Ardern said that by 2040, “with a sustained focus on better demographic representation in the sector”, there could be 151,000 extra jobs for women, 93,000 for Māori and 48,000 for Pacific people working in the digital industries.

So the opportunity is not just to boost economic prosperity, but to ensure that everyone has the opportunity to participate, to enjoy the benefits of doing meaningful, well-paid work. Using tech to enable Australians to shape their future As Australasia's largest homegrown tech company, Datacom is using tech to empower Australian organisations and communities.
Read more
+1
Finding opportunities for tech to support better healthcare Datacom's Health Director Pauline Soo is focused on finding opportunities for tech to solve common challenges in healthcare.
Read more
+1
Creating space for the things that matter Datacom's Stacey Tomasoni on the impact of creating the conditions for people to focus on more meaningful work.
Read more
+1
Connect Academy boosting confidence and opening doors Fostering great talent is critical, which is why Datacom's Connect Academy is helping its teams find new career opportunities.
Read more
+1
Software engineering solving problems from the ground up Datacom's Joel Macfarlane and Sunny Katira believe software engineering capability is a critical advantage in building effective, agile solutions for customers.
Read more
+1
Growing Datacom’s cloud team by building new tech pathways In a tough talent market, Desiree Hutcheon’s technical skills paired with her ability to mentor people and grow their career has been a massive boost for Datacom’s cloud team.
+1
Creating value sits at the heart of innovation: Matt Gooden Working in global companies and small startups has shown Matt Gooden what it takes to drive innovation – now he’s bringing those insights to his role as Chief Innovation and Tech Officer at Datacom.
+1
Shift from UK to NZ proves the right move for cyber experts Several of Datacom’s cybersecurity team are reaping career benefits and enjoying the change in lifestyle after making the decision to relocate their lives from the UK to New Zealand.
+1
2022 Year in Review
Previous 1. Our Year in Review Next 3. Our customers